On a blustery Sunday afternoon in late November, I rushed to meet two dear friends for lunch in downtown Frederick. Not a big fan of parallel parking, I pulled into the Carroll Creek parking garage and nearly reached the top before I found an open space. Then I saw it: a ghost sign for the Frederick Beauty Academy.

The Frederick Beauty Academy opened in 1965 at 54 E. Patrick Street, now the home of Brainstorm Comics. According to an article in The News, the academy offered students a combination of theory classes, hands-on experience and work on “speed and perfection” to reach the 1,500 hours for their license.

“Instead of taking books home to study, they sometimes carry their mannequin heads home to practice the skills of hairdressing learned during the day,” according to the September 1967 article. 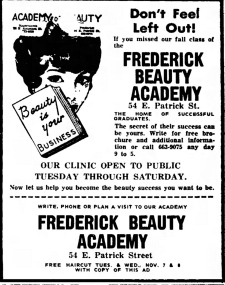 At the academy, students learned how to hold a comb, part hair, color (and color correct) hair properly, wig care, as well as the latest styles, according to the article.

A newspaper ad for the academy in 1967 offered readers free haircuts on Tuesdays and Wednesdays: “Now let us help you become the beauty success you want to be.”

In a 2005 Frederick News-Post article about hair stylists, a graduate of the academy noted the school closed in the mid-1970s.

Caption: An ad for the Frederick Beauty Academy in The News, November 6, 1967