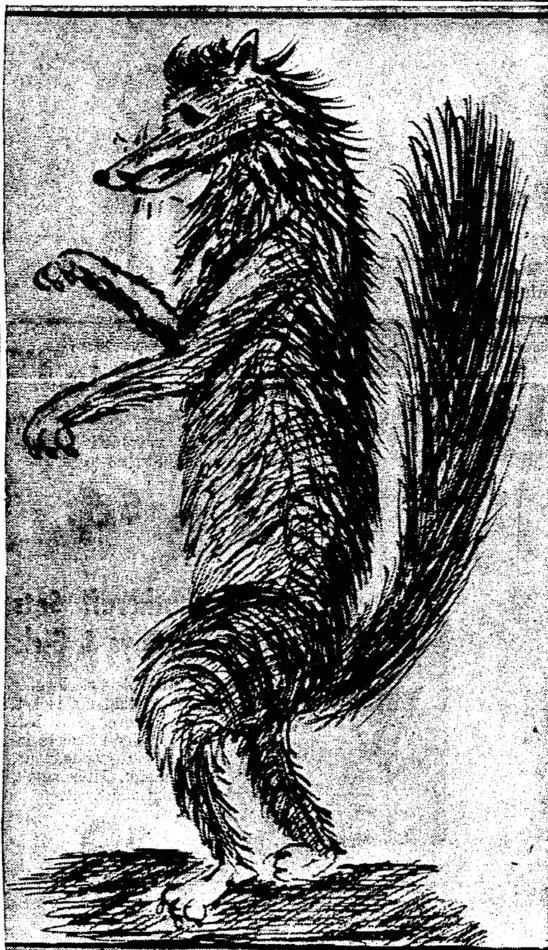 In November 1965, a Frederick County newspaper received a call from a tipster reporting that he fought off a frightening creature in his backyard — the dwayyo.

In The News article “Mysterious ‘Dwayyo’ On Loose In County” (complete with the subhed “Don’t Mess with It”), a man named John Becker reported fending off a 6-foot-tall, black-haired creature with a bushy tail in his backyard on Fern Rock Road.

The paper reported this call to the state police, who investigated the claim. “Sgt. Clyde B. Tucker of the local state police, said as far as he knows there is no such thing as a dwayyo, there is no place in Frederick County known as Fern Rock Road and no one by the name of John Beck can be found,” according to an article in The News.

Even though that was the case, hunters reported a number of Dwayyo sightings after the original report.

But unlike the snallygaster of years past, the witnesses who spoke about the dwayyo were unnamed in news articles. “My dogs started chasing something, and I saw it was black, but I didn’t think too much of it, believing it was a dog or maybe even a bear,” claimed an unidentified hunter in an article in The News. “However, after reading the newspaper article, I’m not too sure it wasn’t a dwayyo. It trotted like a horse. I don’t know what it was, but I’m going to look for it this week.”

There was even supposed to be an organized dwayyo hunt that was to start a Frederick Community College in early December 1965, but fizzled out when not a lot of folks showed up. However, a news article stated that someone saw “a pickup truck full of boys, some with helmets and waving machetes” on West Seventh Street, though the witness wasn’t sure if the group was looking for the dwayyo.

A Burkittsville resident had an interesting theory as to the creature’s origins — related to the snallygaster, another Frederick County creature that supposedly laid eggs that hatch every 20 years. “The eggs should be hatching just about now,” said the unnamed man in a News article. “And the dwayyo could actually be a snallygaster.”

Here’s a fun opinion of the day: “A Frederick man, obviously not worried about a dwayyo, said ‘I think the person who called that story in must have been getting into the holiday “spirits” a little too soon.’”

And here’s some commentary from the original article reminding us of the times the sighting took place in: “No one actually knows if there is such an animal or thing as a dwayyo, but if there is, and there is always a chance, as soon as the Russians hear about it, they will claim they had it first.”

Do you think the dwayyo is real? Share your opinion in the comments!

Image Source: Sketch of the dwayyo by News-Post sketch artist Ed Mull from the December 1, 1965 issue of The News.

One thought on “The Dwayyo: ‘Don’t Mess with It’”