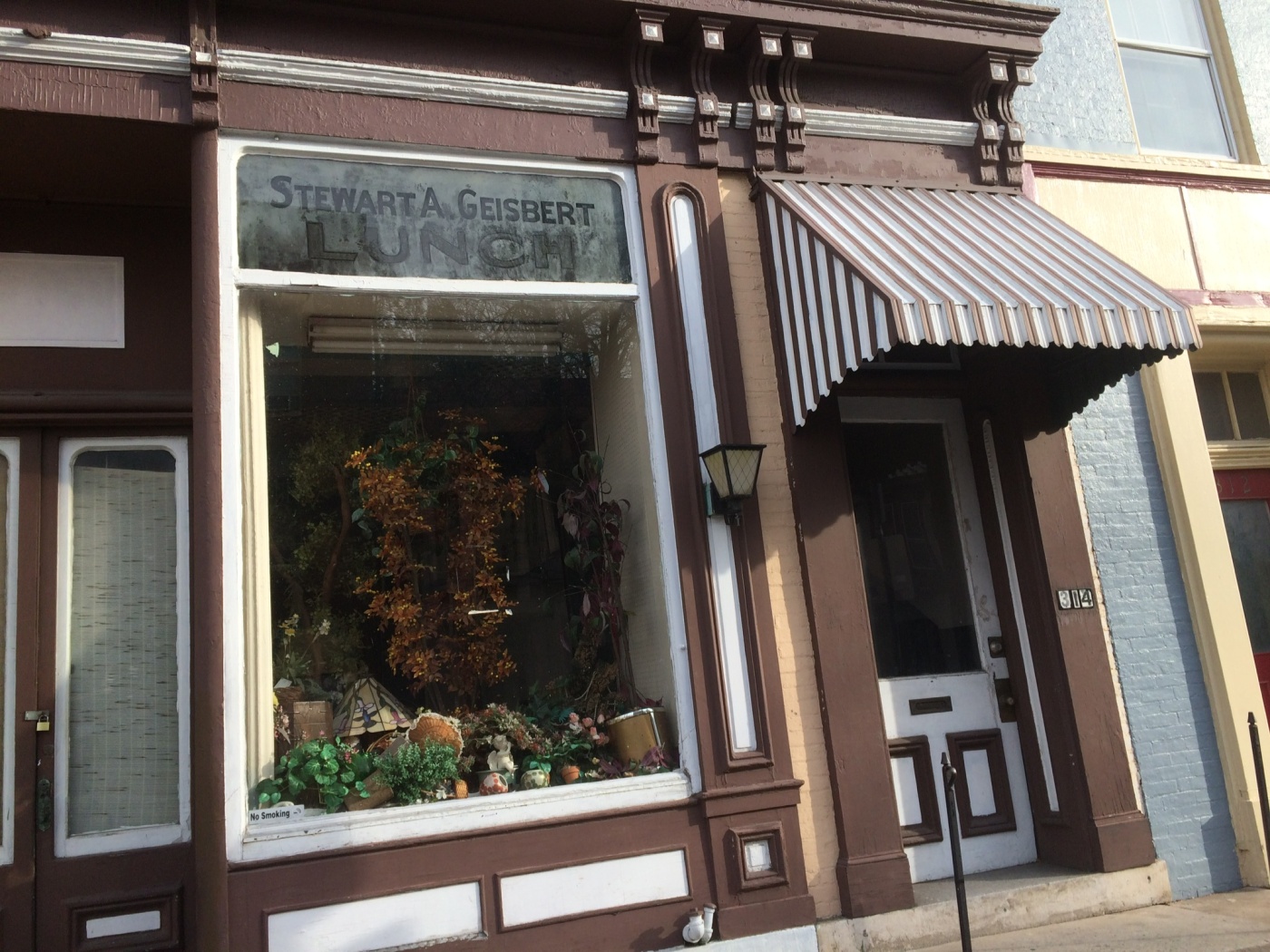 Passing through the 300 block of North Market Street in downtown Frederick one spring day a while back, I finally noticed it.

I had driven down this street countless times, always admiring the character and architecture found there. I’d even been to the Old Towne Tavern across the street many times in my 20s, but I must have been too focused on getting to my destination back then to ever notice.

But there it was, hidden in plain sight. Painted on an upper window of what used to be a storefront were the words “Stewart A. Geisbert Lunch.”

And with that, I started my quest to find out more.

At first, I thought it would be easy to find information, like the other times I’d researched ghost signs I’d spotted.

But this was different. No ads for Stewart A. Geisbert Lunch in the local papers. The closest I could find were ads for a Stewart A. Geisbert who was a Baltimore Sun newspaper distributor and one who was the head of a bus line. And there were other Stewart Geisberts in town in the same time period — hard to believe, but true.

It all left me wondering: Who was Stewart A. Geisbert? The answer took a while to find, and I know I’ve only scratched the surface, but I’m excited to share what I’ve found out so far.

Intrigued to learn more about this mystery man, I turned to Ancestry.com to see what I could find.

A June 1917 World War I draft registration card provided some details about Stewart. At that time, he was 28 years old with gray eyes, dark hair, a medium build and of medium height. The card listed his employment as a merchant.

A few years later, in the 1920 census, Stewart’s occupation was listed as the proprietor of a bus line, and he was living as a boarder in Frederick. By 1930, he was in the East Third Street home that he lived in until his death 20 years later. The 1930 census also revealed that Stewart had married at age 30, and he and his wife Naomi had had a daughter and three sons. At this time, his occupation was listed as a chauffeur at a taxicab company.

The 1940 census shared some changes in Stewart’s life. At this point in his life, he’d become a widower, and his occupation was listed as a daily newspaper distributor.

While I was unable to determine when he opened Stewart A. Geisbert Lunch on Market Street, according to Frederick City directories, he operated it from at least 1940 through 1942; it was listed in the directory as a restaurant and bowling alley.

When it was time to register for the World War II draft in April 1942, Stewart was listed as self-employed, with his home address and North Market Street address listed for his employment location. By this time, according to the draft registration, his dark hair had turned gray.

An auction notice in The News in August 1943 listed Stewart’s restaurant and bowling alley merchandise up for auction, including a “luncheon counter and 12 stools … 2 sets rubber band duck pins and 15 duck pin balls…” among the many other items needed to run a restaurant.

Stewart died in 1951. From his obituary in the Baltimore Sun: “Mr. Geisbert was one of Maryland’s pioneer bus line operators. After World War I, he operated a fleet of Packard limousines between Frederick, Baltimore and Washington. He became Frederick distributor for the Sunpapers eighteen years ago.” His obituary also revealed that he had remarried.

Sadly, his 24-year-old son, Stewart A. Geisbert Jr., a brakeman for B&O Railroad, died later that year from injuries he sustained after being found along the tracks in Brunswick, though officials were unsure of the exact circumstances.

Stewart A. Geisbert is buried in Frederick’s Mount Olivet cemetery.

Have any additional insight on Stewart A. Geisbert and his life in Frederick or his restaurant? Email me at bygonemd (at) gmail.com or share in the comments!

5 thoughts on “The Mystery of Stewart A. Geisbert Lunch”