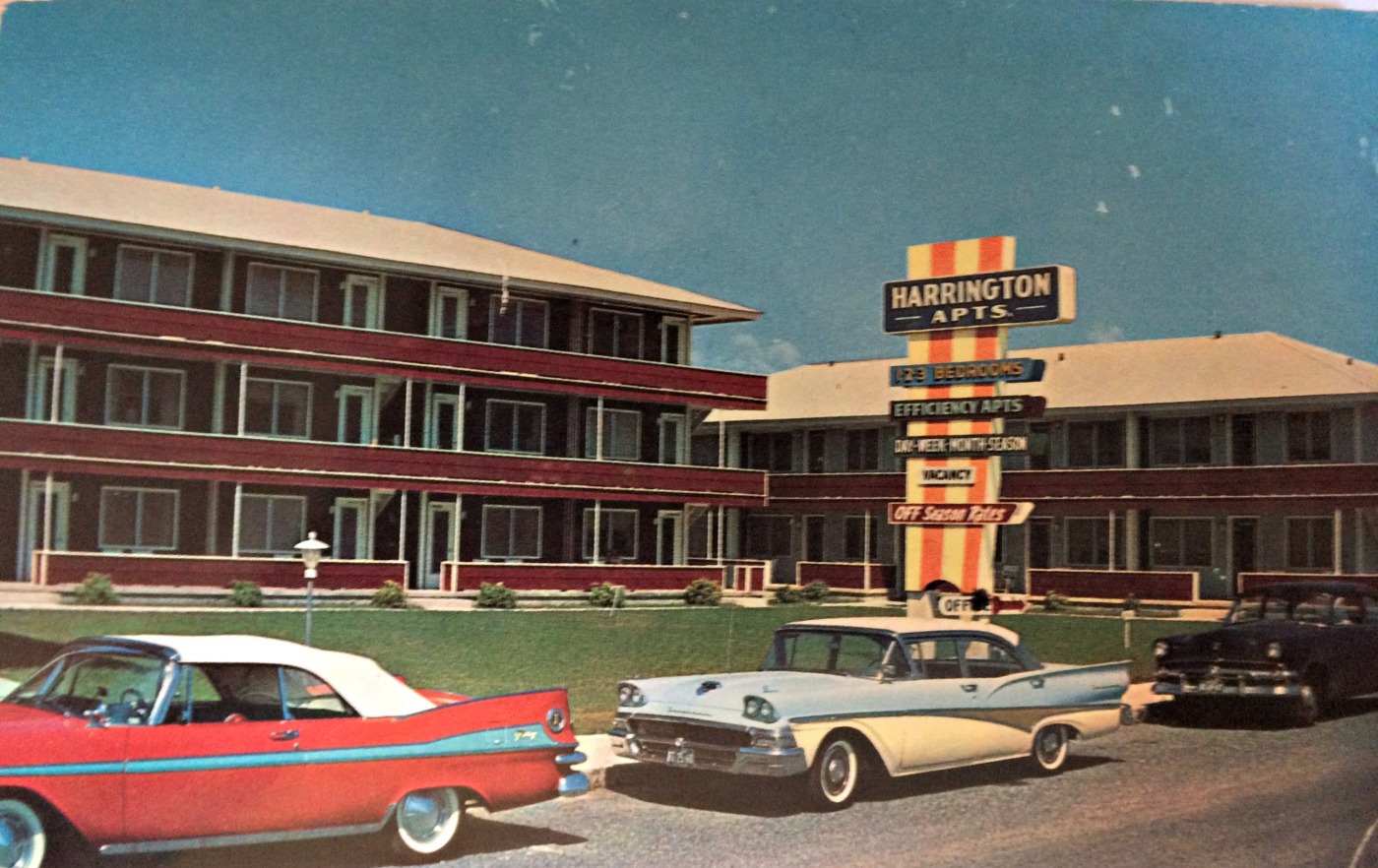 When I was little, we went to Ocean City for a week’s vacation every August.

We’d set off super early in the morning, before it was light out, with plenty of stops along the way to check out ponds that my dad had planned on fishing at during the week.

Sometimes my aunt and uncle would come, and my uncle would fish with my father while my aunt would spend time with my mother, brother and me, whether it was shopping, walking the boardwalk, playing miniature golf, going to the arcade or just relaxing.

My father would take us to the beach, and my brother and I would ride our rafts in the ocean. And, no matter what he did, the tops of my father’s feet would always burn as he sat in the sand and watched us play in the water.

My earliest, foggiest memories of our beach trips involve staying at the Harrington Apartments on 19th Street. Mostly, I remember the building’s red exterior, and recently I was lucky enough to find an old postcard of the place.

The back of the postcard described the interiors:

Ads for the apartments with similar language ran in the Baltimore Sun in the mid-1950s and early 1960s to entice would-be beachgoers. And one ad, featured in the Sun in mid-April 1959, described the Harrington as “facing the ocean,” (although I can’t really remember after all these years).

The apartments were built and run by the Harrington brothers: Gordon, William and Phillip, in the 1950s. They also built the Harrington Arms on 29th Street in 1960 as well as other Ocean City motels that still are in existence today, including the Sea Hawk on 124th Street and the Shangri La on 84th Street, according to a 1989 article in the Daily Times.

Gordon Harrington shared his memories in a few articles and letters to the editor. From one 1993 Daily Times letter: “I did a lot of thinking back and reminiscing this past July 4 about my first July 4 in Ocean City — 54 years ago in 1939.

“I rented the Dinner Bell restaurant, which was in the Monticello Hotel on 3rd Street. It was a family business, which included my brothers, Gerald, Phillip and Bill,” he wrote to the paper, and shared stories of the restaurant’s beginnings, including a dog fight that occurred in the dining room during the short time they allowed pets in the restaurant!

It appears as though the Harrington of my childhood closed for good in 1989. In early October of that year, a notice appeared in the Daily Times announcing the auction date of the furnishings of the 40-unit building, including refrigerators, window air conditioners, lawn furniture, end tables, beds, kitchen utensils, curtains and more.

Then, in late November 1989, a brief appeared the Daily Times regarding the structure:

“Several traffic signals along Coastal Highway were taken down by the State Highway Administration Monday night in order to facilitate the move of 12 buildings, police said. The buildings were part of the Harrington Apartments located on Baltimore Avenue between 19th and 20th streets, police said.”

The Harrington brothers have all passed away; Gerald died in 1949, Phillip died in 1985, William died in 1991, and Gordon died in 1998, according to obituaries in the Daily Times and Star-Democrat newspapers.

In a 1989 Daily Times article, Gordon shared his thoughts about Ocean City, past, present and future: “It’s a good family place. It’s been good to me. I have a lot of good memories of this place. I want other people to have those memories.

“…I look out at the beach and see kids two years old digging in the sand. I have to believe that as they get older, they will remember all this and come back to Ocean City.”

I remember, Mr. Harrington, and I bring my children back every year to experience Ocean City and to make memories just like the cherished ones I have from my childhood.